No doubt you’ve heard Rush Limbaugh’s occasional rants about the issue of man-made climate change. It’s a hoax, he says, complaining that the science isn’t based on actual data but on computer models. Well, I'd like to address that point.

No doubt you’ve heard Rush Limbaugh’s occasional rants about the issue of man-made climate change. It’s a hoax, he says, complaining that the science isn’t based on actual data but on computer models. Well, I'd like to address that point. In my view, climate scientists can't help but employ computer models because the phenomenon they're attempting to simulate doesn't exist in reality. In other words, these models are the scientific equivalent of digitally generated Unicorns.

Given the dire warnings we hear about overheating the Earth with greenhouse gases, we ought to step back a moment and ask, what is heat? Is it some kind of entity, like a pile of leaves on the lawn? No, heat is more like a verb than a noun; it is an action that occurs due to a temperature difference. Heat is that which heats, i.e., raises a material body’s temperature. Broadly speaking, this action is accomplished by vibration. In conductive heat transfer, quickly vibrating molecules excite slower neighbors, thus raising their temperature. By the same token, as molecules vibrate faster they emit more light and at higher frequencies, and this too – radiative heat transfer – is a means of heating something that's radiating less vigorously.

It shouldn’t need saying that heat always transfers from more to less. That is, a conductive donor cannot make the recipient’s temperature higher than its own, nor can a radiative donor make the recipient radiate more than the donor is supplying. Otherwise, this would constitute the creation of thermal energy ex nihilo, violating the law of energy conservation. This law basically states that you can never squeeze more energy out of less; you can only break even.

Being imaginary, however, a Unicorn is exempt from the conservation law, as shown by The National Center for Atmospheric Research diagram below.

Here, please note, the Earth’s surface and atmosphere together are seen to gain a total of 239 watts per square meter from the Sun (the rest is reflected) and ultimately to release that 239 to outer space. Yet here the Earth’s surface is also seen to discharge 396 watts per square meter due to a shroud of “Greenhouse Gases” constantly blasting a radiant power of 333 downward. (NASA's version of events is much the same.)

Bear in mind that the term “watts per square meter” denotes a rate of energy outlay, one Watt being equal to 1 Joule per second, which is not a pile of leaves. In this sense, wattage is akin to rates like miles per hour or gallons per minute. So if you still can't see the Unicorn hiding in the NCAR diagram, perhaps this visual aid will help. 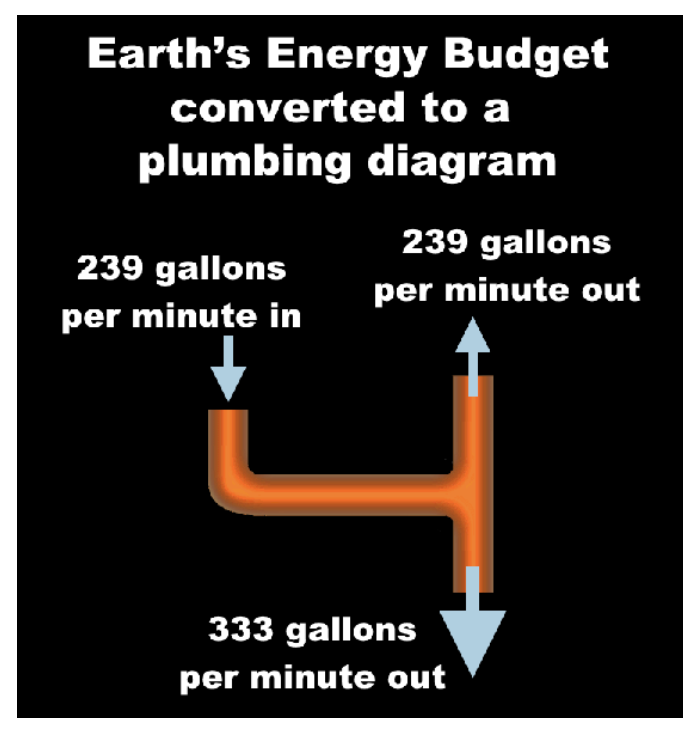 What you might call a Proof Of Absurdity lies in the simple fact that no one has been able to put this reputed radiative mechanism to use. For consider, if less than 1% of our leaky atmosphere’s gases can generate 139% more radiant energy than the Sun provides, a far greater surplus could be generated simply by replacing an open volume of gas with sealed panels and thick insulation. Why, the resultant oven could theoretically roast a turkey with a double-A battery!

But such a radiative enhancement mechanism has not and never can be replicated. It's physically impossible.

This is not to say, however, that scientists haven't tried to prove that so-called "greenhouse gases" reduce radiant heat loss by — umm, radiating. On the premise that CO2 and other gases have a way of trapping heat, a team from Lawrence Berkeley Laboratory exhaustively tested the insulative impact of several infrared-absorbing gases as fillers for double-pane windows. Please read the report yourself, but I will cut to the chase: They found that infrared emission from these gases "adversely affects the window performance" and, in particular, that “the infrared radiation properties of CO2 is unnoticeable.” My emphasis.

Bottom line, although misnamed "greenhouse gases" absorb and emit thermal radiation, they cannot make the Earth’s surface radiate more energy than the Sun supplies. That the Earth’s surface temperature is higher than assumptions have led certain people to predict is attributable to their faulty assumptions, not to a few trace gases.

Rush Limbaugh is right. His instincts are sound. There's many a fanciful Unicorn lurking inside this “settled science,” which is why its forecasts keep failing.

A former radiochemist for Yankee Atomic Electric Company and similar sites in the United States, Siddons found himself out of work at one point and in 2007 decided to learn a bit about the Greenhouse Effect so that he could speak somewhat knowledgeably if ever the subject came up in conversation. Little did he know at the time what a nightmare journey he was embarking on.