Does Obama Want to Lose? Yes

It seems like a bizarre notion, but does Barack Obama want to lose the election in November? 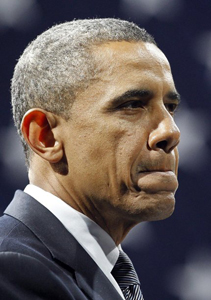 It seems like a bizarre notion, but does Barack Obama want to lose the election in November?

I think he does!

One is struck by the way Obama has visibly aged in the job. He may well have grown weary being POTUS.

By any rational standard, one would say he wants a second term, but Obama has always operated in a fantasy world where mere words are supposed to translate into reality. And he has repeatedly talked about being a one-term president.

He is, after all, his own invention; the author of two memoirs of a life that had little achievement to point to other than getting elected first to the Illinois legislature and then to the Senate where he lingered a bare two years before running for president.

I raise the question because Obama seems to be deliberately irritating the very people who are supposed to be his “base”; the hard core liberals, the Hollywood crowd, youth, and unions, among others. His partisanship has put Congress into total gridlock.

When members of the Occupy movement showed up in Washington, D.C., one of them threw a smoke bomb onto the White House lawn. Others who have been camped out in a park there are likely to be tossed out if for no other reason than the place is overrun with rats and has become a public health hazard.

The decision to stop the Keystone pipeline is a deliberate offense to the unions that have contributed millions to his campaign. Why? It pleased the environmental groups like the Sierra Club and Friends of the Earth. Americans, however, understand the pipeline represented both jobs and oil, two things they deem worth having.

Then there are all the vacations Obama and his family takes. They have one thing in common. They are ostentatiously expensive. Obama or Michelle always seem to be going on vacation or returning from one. The characterization may be unfair, but perception is everything.

Americans are very keen on their military and, of all the government programs Obama could have chosen to trim, he’s had the knives out for the Pentagon since he took office. While a war-weary public was likely pleased when he withdrew troops from Iraq (neither Bush, nor Obama had a choice as the Iraqis made it clear they wanted U.S. troops out), the fact remains that the main news out of Iraq these days are bombings as the Sunni versus Shiite conflict has returned. Afghanistan remains a millstone.

Even in the face of a clear threat, it is unlikely that Obama would respond militarily between now and Election Day. The most likely scenario, however, would be an Israeli decision to strike at Iran before it becomes a full-fledged nuclear threat. It must be said, however, that Obama and other NATO nations have positioned some military assets in the Persian Gulf, but would he pull the trigger? It’s doubtful.

The most obvious problem Obama faces is unemployment. It’s variously set at anywhere from 11% to 20% depending on the part of the nation you’re discussing. It still is far too high everywhere and he gives every impression of being, if not indifferent to it, at least in no hurry to address it. Most certainly none of his programs have reduced it. His alleged “stimulus” was little more than a political slush fund that added billions to the national debt and failed.

Every President is subject to “events” and the likely default of Greece and financial troubles of several European nations are likely to impact the national election as Americans try to sort out what effect it will have here. Obama has already presided over the first downgrade of America’s debt rating and we shall surely be reminded of that in the months ahead.

The other event will be the Supreme Court hearing of the case against Obamacare in March. They may not issue a decision right away or they might issue one just before November 6th.

There are two lines of thought about the forthcoming national election. Past Presidents were relieved to leave office despite its power and prestige. (1) Obama may not like being President and (2) he has concluded that he will be defeated. He gives the impression of not caring about public opinion anymore.

The only people publicly defending him seem to have Attention Deficit Disorder. Either they haven’t paid attention to what a disaster his term has been thus far or they just don’t think it’s his fault.

I think he will go through the motions, but I also think a majority of voters no longer believe a word he says anymore.