The Government Cannot Take Away Our Guns

Our Founding Fathers were unanimous in their belief that Americans should have the right to bear arms and it is no accident that it is the Second Amendment that guarantees the rights expressed in the First. Thomas Jefferson wrote, “No free man shall ever be debarred the use of arms. 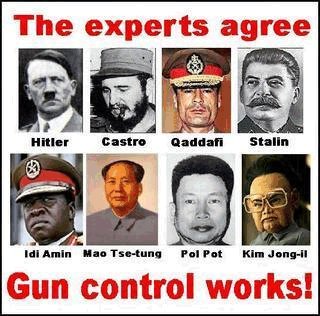 The government cannot take away our guns. This is not to say it hasn’t tried by means of several thousand laws concerning gun ownership, the right to carry a concealed weapon, and the demand that we undergo background checks to own one.

What I mean is that the act of trying to take our guns would be futile and, were it attempted, would result in an all-out insurrection.

From well before the nation’s independence, won by gun owning militias and a standing army, Americans have always been armed. In the early years of the nation’s history you surely were not going to put meat on the table without one.

Our Founding Fathers were unanimous in their belief that Americans should have the right to bear arms and it is no accident that it is the Second Amendment that guarantees the rights expressed in the First. Thomas Jefferson wrote, “No free man shall ever be debarred the use of arms. The strongest reason for the people to retain the right to keep and bear arms is, as a last resort, to protect themselves against tyranny in government.”

One of the greatest tyrannies, one well known in nations where tyranny is “the law of the land”, is to deprive citizens of gun ownership. It is instructive that the sales of firearms have increased dramatically since Obama was first elected President in 2008. A November 9th CNN news article following his reelection began by noting “Gun sales are up in the wake of Barack Obama’s reelection on Tuesday, driven by fears of tighter regulations under a Democratic president, especially for firearms that might be classified as assault weapons.”

It is no accident that gun sales are up, nor that the most outspoken opponents of gun ownership are Democrats/liberals. When Obama spoke at the Newtown, CT vigil for those killed, he said, “Can we honestly say that we’re doing enough to keep our children, all of them, safe from harm? If we are honest with ourselves, the answer’s no. We’re not doing enough, and we will have to change.” Americans have had four years of “change” under Obama and, despite his reelection by a slim margin, at least half of them don’t like it. The rest are going to like it even less after January 2, 2013.

Obama implied that the school massacre was the result of the many guns owned by Americans and asked if that “is somehow the price of our freedom?” The answer is yes! The constitutional scholar, Joseph Story (1779-1845) noted that “One of the ordinary modes by which tyrants accomplish their purposes without resistance is by disarming the people and making it an offense to keep arms.”

As recently as October 2011, a Gallup poll revealed that “Forty-seven percent of American adults currently report that they have a gun in their home or elsewhere on their property. This is up from 41% a year ago and is the highest Gallup has recorded since 1993, albeit marginally above the 44% and 45% highs seen during that period.” At 47%, reported gun ownership “is the highest it has been in nearly two decades—a finding that may be related to American’s dampened support for gun-control laws.”

So let President Obama, Sens. Dianne Feinstein and Charles Schumer, and New York Mayor Michael Bloomberg try to exploit the Connecticut tragedy to get stronger gun control laws through Congress it’s not likely to happen. Nor has it been lost on many following the story that Connecticut’s current gun laws are among the nation’s strictest. The Brady Campaign to Prevent Gun Violence ranks the state as second behind California. Simply put, states that permit concealed carry have less rates of crime and homicides than those that do not.

Gun owners must besiege Congress with messages that banning assault weapons or any others will mean a vote against their legislator.

I began by saying that the government cannot take away American’s guns and one need only consider the numbers that own them. Recall the Gallup poll in which nearly half admitted to gun ownership.

James Sterba in his new book, “Nature Wars” about the reforestration of America and the subsequent increase in the numbers of animal species with which we share our suburbs and exburbs, points out that “Each fall some ten million Americans take to forest and field carrying rifles, shotguns, pistols, old-fashioned muzzle-loaded long guns, cross-bows, or long bows and arrows in a display of armed might that would send jittery potentates scrambling for the barricades in less stable parts of the world.”

“Pennsylvania alone fields a force of deer hunters twice the size of the U.S. Army.”

Hunters, city folk and suburbanites who legally own guns in America comprise an army that no President or Congress would want to engage and few legislators anywhere would want to arouse.