It’s taken since 2008 and two elections, but as Obama moves into his second term he is beginning to lose traction with Americans, including those who have supported him and who give him approval ratings in the fifty percent bracket. 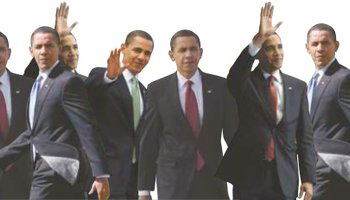 It’s taken since 2008 and two elections, but as Obama moves into his second term he is beginning to lose traction with Americans, including those who have supported him and who give him approval ratings in the fifty percent bracket.

Previous second term presidents have enjoyed comparable ratings, but they tend to plummet as events and policies overtake reality. Obama’s current poll numbers are the same as Bill Clinton’s and Ronald Reagan’s at this point in their presidencies.

Obama’s biggest problem these days is sequestration which takes effect on March 1. It is not so much the across-the-board reductions as the scare tactics the President and his surrogates have been using to get Congress to put the kibosh on it.

Democrats are afraid the cuts will eventually redound to them and Republicans are afraid they will be blamed, but, if the mainstream media begins to report more widely (and truthfully) that sequestration was an Obama proposal, his popularity will suffer. It’s a big “if”.

Think of it this way. The President and his cabinet members are shouting about Armageddon regarding a 5% cut to the rate of spending that has increased more than 17% on average during the Obama presidency.

Closing down government services as a tactic will backfire. Americans rightfully expect the meat to be inspected, the borders protected, passports to be provided, and all the other functions of government to continue. Even with sequestration, there is no reason why they should not. It is a miniscule reduction stretched out over a decade’s time. Meanwhile the cost of entitlement programs such as Social Security, Medicare and Medicaid will grow, eating into the funds available for all other domestic and defense programs.

Peggy Noonan, a columnist for The Wall Street Journal, put her finger on Obama’s growing problems. “It’s always cliffs, ceilings and looming catastrophes with Barack Obama. It is always government by freakout.” After a while, even his supporters grow weary of that and, more importantly, it creates an image in their minds that he is incompetent and either unable or unwilling to govern.

Golfing with Tiger Woods and Big Oil buddies while sequestration loomed did nothing to enhance his image. A wife that is forever hectoring Americans about every bite they eat doesn’t help either.

“Mr. Obama thrives in chaos,” wrote Noonan in a recent commentary, but noted that “so far this seems to be working fine for him”, citing a recent USA Today/Pew Research Center poll that half the respondents said it will be the Republican’s fault if the sequester went through, but rising gasoline and food prices hit people where they feel it the most and the sequester has nothing to do with either.

“Government by freakout carries a price,” said Noonan. It wears people down. It doesn’t inject a sense of energy, purpose or confidence in those who do business in America, it does the opposite.”

The mainstream media have been Obama’s lapdogs, an adoring mob, since he began to campaign for his first term and throughout it, but we are beginning to see cracks in that. Even the late night television hosts are beginning to take shots at Obama and if Saturday Night Live, along with The Daily Show with Jon Stewart, turns on him he’s toast among his youngest (and least informed) fans. A lot of them are already unhappy with their employment prospects.

One might expect The Washington Post’s designated conservative columnist, George F. Will, to express doubts as he did recently in “The Manufactured Crisis of Sequester”, but when Bob Woodward, an associate editor of the Post, writing about “Obama’s Sequester Deal-Changer” points out that Obama has been lying through his teeth about it, that is a signal to the inside-the-beltway crowd that Obama is not to be trusted.

As Woodward pointed out, “the automatic spending cuts were initiated by the White House of Jack Lew and congressional relations chief Rob Nabors…Obama personally approved the plan for Lew and Nabors to propose the sequester to Senate Majority Leader, Harry Reid. They did so at 2:30 p.m., July 27, 2011, according to interviews with two senior White House aides who were directly involved.” Lew’s recent testimony before the Senate committee considering his nomination to be the Secretary of the Treasury was deemed “inaccurate” by Woodward. That’s a polite way of saying he lied. In a recent radio interview,

Woodward described Obama’s claim that he would be unable to defend the nation as the result of the sequestration cuts as “madness.”

Obama “owns” sequestration despite all the lies that poured out of the White House. It is the direct result of his failure of leadership when the special 2011 congressional, bipartisan committee offered recommendations on how to reduce the debt and deficit.

I predict his appointment of John Kerry to be his new Secretary of State will prove disappointing to Americans as will his selection of Chuck Hagel to be the Secretary of Defense, Jack Lew as Secretary of the Treasury, and the potential approval of John Brennan to be the CIA Director will be disappointing, too. Hagel’s testimony revealed a level of incompetency rarely seen on Capitol Hill. Kerry thinks climate change is the biggest threat to the nation.

It took months for Nixon’s Watergate scandal to unravel in the 1970s and this well may be the case of the failure to take any action during the 2012 attack in Benghazi that killed an American ambassador and three others. The lies that followed are now exposed. Washington may begin to leak other details in the weeks and months ahead.

Another issue that will affect the President’s popularity is his attack on the Second Amendment; eighty million Americans, conservatives and liberals alike, own guns. None are willing to give them up, submit to national registration, and other schemes. In the past week, Alaska, Montana and Kentucky legislatures all passed a Second Amendment Preservation Act; a nullification law to reject any executive orders or proposed laws affecting gun ownership.

The Keystone XL pipeline has been under “review” for five years and all the obstacles except the President’s refusal to allow its construction have been cleared. It is a dramatic example of his administration’s opposition to any energy development except for solar and wind.

In the end, all Presidents rise and fall on the basis of events in which they have been a participant or over which they are seen to have exercised an inadequate effort to shape.

Obama’s forthcoming trip to Israel is an effort to project a support that he has not demonstrated during his first term and a likely discussion of combined efforts to stop Iran’s nuclear weapons program. The “Arab Spring” has become an unmitigated disaster, particularly in Egypt. Syria is in its second year of civil war, Iraq is wracked with bombings, and the president of Afghanistan just ordered Special Forces out of a key province.

There’s another factor. People are growing tired of Obama’s continuous “campaigning.” They have heard all his standard rhetoric about rich people, fairness, and the need for more taxes. As his second term barely begins, it is all very stale. It is all too much Obama.