The Mini-Ice Age has Arrived

Climate warmists always liken warming to catastrophe. But the real danger to humanity of climate cooling (much more realistic than climate warming) is far more catastrophic than warming. In which beachfront climate would you rather live? On a beach in sunny Florida, or on the frozen beach of Hudnon's Bay in northern Canada? 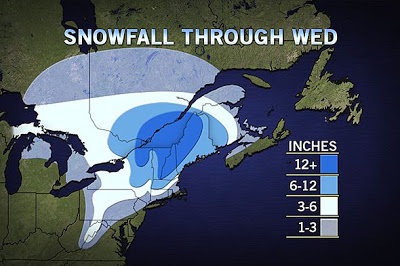 Climatologists and meteorologists are familiar with the last Mini Ice Age (MIA) that occurred between 1350 and 1850 AD. It is also referred to as the Little Ice Age. Suffice to say it was cold and, as such weather cycles tend to do, it altered history in a variety of ways.

The failure of crops was one aspect of the cold spell and in France the revolution that overthrew the monarchy is attributed to the unhappiness of its citizens, but famine in the northern hemisphere was widespread. In the United States, it is best recalled for the horrid winter our revolutionary war soldiers spent at Valley Forge. At one point during the cycle Americans spent what they called ôa year without summerö when the weather remained too cold to plant crops.

Since climate is cyclical, it is not surprising that the MIA followed the Medieval Warm Period, also known as a climate optimum. Crops flourished, empires rose and declined, and neither cycle had a thing to do with so-called greenhouse gas emissions such as carbon dioxide (CO2) and everything to do with what was happening on the sun.

As spring arrives in the U.S., there was also a broad band of snow storms that comes with it.

One of the worldĺs most respected long-term climate forecasters is Piers Corbyn, an astrophysicist whose expertise is relied upon by corporations and others who need to know what the weather will really be as opposed to the criminally false claims about global warming. His website, WeatherAction, is well worth visiting.

In his own words, ôWeatherAction is involved in the Global Warming/Climate Change debate where we point out that the world is now cooling not warming and there is no observational evidence in the thousands and millions of years of data that changes in CO2 have any effect on weather or climate. There are no scientists in the world who can produce such observational data. There is only effect the other way, namely that ocean temperatures control average CO2 levels.ö

Recently Corbyn announced that ôThe CO2 story is over. It has been pointing the world in the wrong direction for too long. The serious implications of the developing mini ice age to agriculture and the world economy through the next 25 to 35 years must be addressed.ö World cooling is now locked in says Corbyn, citing the decrease in average solar activity and a jet stream that is often further south than normal, resulting in extreme weather events.

Following in the heels of Corbynĺs forecast was the release of a new report by Dr. David Whitehouse, published by the Global Warming Policy Foundation, and what makes it fairly extraordinary after decades of global warming propaganda is that he concludes that there has been no statistically significant increase in annual global temperatures since 1997. Thatĺs seventeen years of atrocious lies about a warming earth.

The irony that Dr. Whitehouse includes in his report is that the atmospheric composition of carbon dioxide has increased during that time from 370 ppm to 390 ppm. So, everything you have been told about carbon dioxide emissions and those of other so-called greenhouse gases ôcausingö a warming earth is just lies, lies, and lies.

ôIf the standstill (lower temperatures) continues for a few more years,ö wrote Dr. Whitehouse, ôit will mean that no one who has just reached adulthood, or younger, will have witnessed the earth get warmer during their lifetime.ö

Now hereĺs the kicker. The President of the United States, according to a recent Business Week article, ôis preparing to tell all federal agencies for the first time that they should consider the impact on global warming before approving projects, from pipelines to highways.ö The result ôcould be significant delays for natural gas export facilities, ports for coal sales to Asia, and even new forest roads, industry lobbyists say.ö

ôIn taking the step,ö said Business Week reporter Mark Drajem, ôObama would be fulfilling a vow to act alone in the face of a Republican-run House of Representatives unwilling to pass measures limiting greenhouse gases.ö

The President, as usual, is lying through his teeth. There is no global warming or, as it is more frequently called these days, climate change unless you include a colder earth in that change.

The result will be four years of a second term in office during which Obama and his minions will do everything they can to slow what little is left of the U.S. economy, currently growing at a rate that requires a microscope to detect.

For the rest of us, the Mini Ice Age has arrived.