The Progressive Destruction of the U.S

Barack Obama is the final piece of the puzzle that illustrates the progressive movement’s century of steady destruction of the U.S. dollar, income taxation, and massive, liberal intrusion into the lives of all Americans from birth to death.

Barack Obama is the final piece of the map in the progressive movement’s century of steady destruction of the U.S. dollar, income taxation, and massive, liberal intrusion into the lives of all Americans from birth to death. 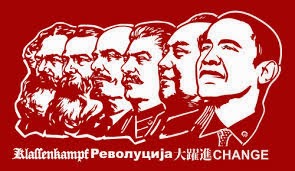 An excellent analysis of this is found in “The Great Withdrawal: How the Progressive’s 100-Year Debasement of American and the Dollar Ends” by Craig R. Smith and Lowell Ponte ($19.95, Idea Factory Press, Phoenix, Arizona). Together they have written eight books on economic topics.

There is a great backlash to the Obama administration’s efforts to impose a socialist economy on America in which the federal government essentially controls all elements of it. The most recent and dramatic example is Obamacare, the takeover of one sixth of the economy. The Tea Party movement emerged to protest it in 2009 and has steadily grown as a political movement.

Their protest march on Washington, D.C. that year drew nearly a million or more Americans.

In 2010 the movement was instrumental in returning power to the Republican Party in the House of Representatives. If the political pundits are right, the forthcoming November midterm elections will remove many of the Democrats who voted for it and may also return power to the GOP in the Senate. The elections are critical to thwarting Obama’s further efforts to destroy the nation by adding millions to its many welfare programs as the result of its failure to increase economic growth from a dismal 2% per year, the lowest in decades. Presidents Kennedy and Reagan took office and reversed recessions. Obama has not.

“Either we successfully reboot the original operating system of individual freedom, free enterprise, and small government that America’s Framers built into the U.S. Constitution or the Progressives will by manipulation and force continue to impose their failed collectivist ideas on humankind’s future,” writes Smith in the introduction to his book. Make no mistake about it, “collective ideas” is another way of describing Communism, often referred to as Socialism.

“They aim to replace Capitalism, private property, ‘selfish’ individualism and God with a human-made Eden, a utopian humanist society where an all-powerful State would equally redistribute the world’s wealth and power to the working elite.” 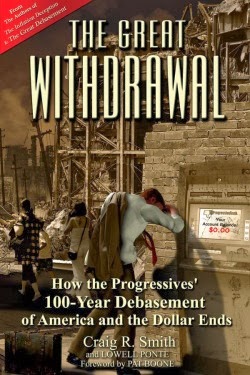 Consider just five ways progressivism has impacted America; (1) abortion that has killed more than 55.7 million fetuses since 1973, (2) banning prayer to support the development of moral values in schools, (3) the spread of same-sex marriage as a legal definition of marriage, (4) the movement to legalize marijuana, a known gateway drug, and (5) a culture filled with films and television that exploit violence and sex.

The utopian dream has been the creation of intellectuals who view themselves as an elite group who should control economies and lives. The failure of the former Soviet Union and the adoption of Communism in China are prime examples of this elitist notion which, as history has demonstrated, includes the murder of hundreds of millions in the process. Progressivism depends on the use of force.

Noting the stalled economic growth in the U.S. Wall Street Journal columnist, Daniel Henniger, addressed the global implications on Feb 26. “If the American economic engine slows permanently to about 2%, you’re going to see more fires around the world like Ukraine and Venezuela. At the margin, the world’s weakest, most misgoverned countries will pop, and violently.”

Craig points out that “More than 100 years ago, these collectivist ideas began to dominate Western civilization. In 1913 they took control of the United States government and began a ‘fundamental transformation’ of our economy, politics, culture and beliefs that continues today.”

The good news, however, “The Progressive collectivist vision today is dying and its death will cause huge changes in our world.” The anger that gave rise to the Tea Party movement is emerging as a widespread desire for national change. Efforts to downgrade the freedoms embodies in our Bill of Rights are generating major resistance.

“The various collectivisms may still pose a military, political or economic threat as their power wanes—but fewer and fewer people take the Left seriously as an ideology anymore. History has thoroughly discredited the Left as both a moral and practical failure” says Smith, adding that “the trouble is, many have likewise lost faith in the values that once made the West great—Judeo-Christian values and belief, free enterprise and the individual rights of the Enlightenment…Millions of Americans have become hooked, dependent on the entitlement state and on the paper money conjured out of thin air.”

There are signs, though, of change. “As of August 2013, polls found that only 35 percent of Americans supported President Obama’s economic policies, a rating similar to President Herbert Hoover’s after the start of the Great Depression. He is destroying the confidence needed to encourage investment in new jobs or to expand businesses.” More recent polls indicate Obama’s performance in office is rating poorly.

We are witnessing the way the Progressive movement works. “When the economy is good, they raise taxes and expand government. When the economy cycle turns negative, the politicians blame others, refuse to reduce government—and, increasingly, use the bad economy as a reason for expanding government and spending even more.”

That is why Obama’s policies have added $6 trillion dollars to the national debt and expanded government welfare programs. At $17 trillion and growing, it is a massive threat to the economy and to a government that depends on borrowing money to pay its bills. The downgrade of the nation’s credit rating—the first in the nation’s history—is a major warning sign if this is not reversed by electing politicians who want to reduce the debt and the size of the government.

Thomas Jefferson said the future of the nation depended on binding those in power “with the chains of the Constitution”, but we have a President who now routinely ignores those limits and wants to rule independent of the legislative branch, Congress, and refuses to enforce existing laws or changes them unilaterally, an issue the judicial branch increasingly is addressing.

America needs a major revision to the progressive income tax system that began in 1913. It needs to end the Federal Reserve’s (a cartel of banks) control of the economy and its creation of money “out of thin air.” It needs to return to the gold standard to back the value of the dollar. It needs to end the Department of Education’s grip on the curriculum that has indoctrinated the generations since the 1960s to accept Big Government. It needs to eliminate the Environmental Protection Agency and return this responsibility to the States. These and other measures must be implemented to return the nation to greatness.

Progressive politics and policies have reversed the greatness of America making it the exceptional nation it was before they were imposed a century ago. That is the challenge of the current and future American generations.