I wish to provide you with sound scientific and chemical engineering analysis of the faults with the Greenhouse Gas Theory, GHGT, proposed to drive Anthropogenic Global Warming and Climate Change, AGW & CC, especially as it pertains to CO2. I want to arm you for this huge, ongoing debate. I seek and receive no financial support from any government, business or organization; I finance my own work in retirement.

For the life of me I cannot get a solid, consistent grip on the underlying physics supporting the notion first proclaimed by James Hansen, Science, 1981, atmospheric CO2 has any quantitatively verified effect on Earth's temperature. It is the duty of AGW & CC[1] promoters to provide it, not skeptics like me. So I claim Barak Obama, Harry Reed, Nancy Pelosi and Al Gore have not explained the physics and quantified the effect to my satisfaction. Like most politicians with only one wing, on the left, not right side, they make claims and charges with little or no relevant evidence to back it up. In American law courts these are called frivolous claims and dismissed (thrown out). When Progressives' expensive schemes collapse due to foreseeable engineering consequences, their claim they are unintended consequences rings hollow. After repeating it for 50 years.

While it is not my job as skeptic, I will offer eight objections to their Greenhouse Gas (GHG) Theory, each of which falsify it. It is their job to prove me wrong. I will present my assertions in simple terms with justifications; I have detailed chemical engineering mathematical analysis verified by experiment to support them.


Consider the following analysis of each smoking gun:

While measuring average annual thermal temperature day-night, pole-to-pole is difficult, there is consensus it is about 15°C. So Hanson declared the difference, his now famous GHGT effect, GHGTE = 33°C, a discrepancy due to his so called greenhouse gases H2O and CO2. While calculating or measuring Earth's emissivity is difficult, it is certainly < 1, so radiating T > -18°C and GHGTE < 33°C.

You want a simple explanation for the GHGT effect? There it is. One short paragraph, fits on a bar napkin. 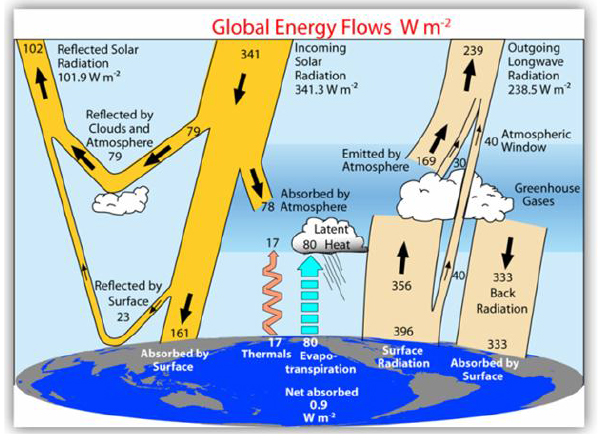 First it says nothing about CO2.

The GHGT does not follow the rate of radiant energy transfer law used commercially by chemical engineers: Q/s = ET4 - at4. Heat transfers in only one direction, not simultaneously in two..

E = emissivity of radiating surface. Varies with its temperature, roughness and if a metal, degree of oxidation. Large variations are possible in a single material, and,

GHGT invented the back-radiation mechanism unknown to physics, transferring heat from a cold body to a warmer one, warming it further. In Nov 2011 I proved if it did, it would be a perpetual motion machine (http://www.slayingtheskydragon.com/en/blog/185-no-virginia-cooler-objects-cannot-make-warmer-objects-even-warmer-still); just what promoters need to drive global warming in perpetuity. That violates of the Second Law of Thermodynamics quantified by famous engineer Sadi Carnot in 1824. I actually proved for a step change in GHGT back radiation, presumably due to increased CO2, the sequence converges to a new steady-state and a finite amount of energy is created (which is impossible). I actually derived the rate of creation from the physical properties:

K is the fraction of radiation from the first bar absorbed by the second colder bar, 0 < K < 1.

Therefore GHGT is false because back-radiation = 0. This means you must change the famous GHGT K-T Global Energy Flows diagram right side beige arrow down from 333 to zero and up arrow from 396 to 63 w/m2 of Earth surface. Just use correct absorptivityí»s and emissivityí»s and it all fits known physics and observations.

While this essay may seem long and complicated, it proves beyond any reasonable doubt with eight smoking guns, GHGT is false, AGW and CC fears are unfounded and the whole issue is a monumental fraudulent hoax for power and money. Harvard Law School would call this an indictment, trial and conviction. My brief essay is nothing compared to 2009 Waxman-Markey CO2 Cap & Trade Bill or Obamacare Law. If you can invest an hour with this essay you can join Sen. James Inhofe (R-OK) running rings around CO2 deniers. Just ask Rep Shelia Jackson Lee (D-TX), Rep Chris Van Hollan (D-MD), Rep Nancy Pelosi (D-CA), Sen Barbara Boxer (D-CA), Sen John Markey (D-MA) or POTUS to refute it.