With the 2012 presidential election right around the corner, suddenly, there is a lot of discussion about whether or not we live in a "post-racial society." I can only conclude that, despicably, "race-baiting" will be a major component of the left's and the White House's Obama re-election campaign.

Suddenly, there is a lot of discussion about whether or not we live in a "post-racial society." With the 2012 presidential election right around the corner, I can only conclude that, despicably, "race-baiting" will be a major component of the left's and the White House's Obama re-election campaign.

Recently, a black publication interviewed me for an article, the topic being "Is America a post-racial society?" Then, flipping through the TV channels, I caught a bit of two blacks on CNN discussing whether or not America is a post-racial society. It's coming up everywhere lately.

I am just giving you a heads-up, folks. All this talk about a post-racial society, which sounds like it came out of a marketing strategy meeting, is designed simply to accuse all who are against Obama's re-election of being non-post-racial. In other words, racist.

The post-racial discussion is absurd, divisive, and a waste of time -- a distraction from real issues. The fact that America elected a black man to be leader of the free world confirms that Americans think post-racially. Blacks are only 12% of the U.S. population. Even if every black in America voted for Obama, without millions of white votes, Obama would not have been elected. Are we a post-racial society? Of course we are.

What I find so repulsive is that the left and the Obama administration are well aware of this truth. And yet, they will, without hesitation or conscience, double down on their efforts to inspire black hatred against white Tea Partiers and fuel white guilt to achieve their goals. 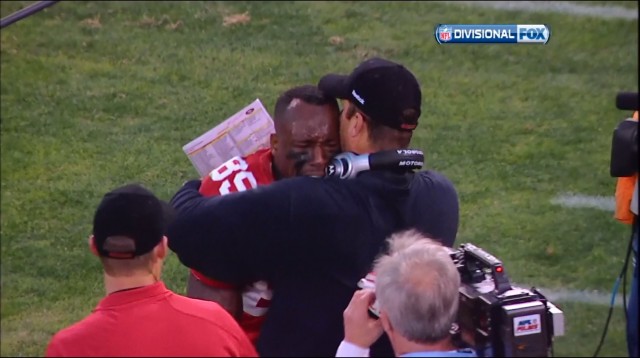 I witnessed a moving example of our post-racial society while watching a pro football playoff game on TV. Upon winning the game, black football player Vernon Davis, with tears running down his face, ran over to his white coach, Jim Harbaugh. Davis cried as he and Harbaugh hugged for a long time. They were just two men: a respected coach and a respected player. Race did not matter. America is a post-racial society.

Only agenda-driven knuckleheads design new tactics to keep Americans apart, suspicious of one another, and at each other's throats along racial lines.

Now, do not get me wrong. I am not saying racism, on both sides, does not exist in America. Of course, it does, along with every other sin. Such will be the case until the Lord takes us home. But as a nation, the American people have proven themselves honorable, fair-minded, compassionate, and extremely generous.

The '60s TV series Star Trek was an excellent example of a "post-racial society." The crew was of various races and yet they related to each other as individuals. Race was irrelevant.

I love the way the left always accuses us, the American people, of the evils of which they are guilty. We do not sit around thinking of phony intellectual-sounding phrases such as "post-racial society." We simply live, work, and play together as Americans. The left and black Liberal Plantation overlords are the ones guilty of thinking "non"-post-racially for political purposes. Their exploitation of race continues to devastate blacks in terms of their attitudes and expectations. Black race profiteers are betraying their own people by convincing them that they are victims, despite being blessed to be born in the greatest land of opportunity on the planet. For crying out loud, I caught one of those Hollywood insider TV shows talking about some black rapper's ninety-million-dollar fragrance line. Black unemployment being at an unprecedented high has nothing to do with white America's views on race and everything to do with Obama's economy.

All of this absurd post-racial talk confirms that most-assuredly, the Obama administration and his minions plan to exploit race, along with class envy, in Obama's reelection campaign. This is why the left has been relentless in their attempts to brand the Tea Party racist. Tea partiers oppose Socialism and ignoring the Constitution, not Obama's skin color.

As a post-racial-thinking American, I am doing everything in my power to make Barack Hussein Obama a one-term president, and not because he is black. Obama must go because his vision for our future is an anathema to all we hold dear and the vision of our Founding Fathers.

If I can offer one bit of heartfelt advice to my fellow black Americans who may be caught up in all of this post-racial vs. non post-racial nonsense, please, forget about race and simply go for your dreams.