The scandal is growing, as Congress investigates and NOAA brings in outside experts to review a key study.

Less than 72 hours after a federal whistleblower exposed shocking misconduct at a key U.S. climate agency, the CEO of the nation’s top scientific group was already dismissing the matter as no biggie. On February 7, Rush Holt, head of the American Association for the Advancement of Science (AAAS), told a congressional committee that allegations made by a high-level climate scientist were simply an “internal dispute between two factions” and insisted that the matter was “not the making of a big scandal.” (This was moments after Holt lectured the committee that science is “a set of principles dedicated to discovery,” and that it requires “humility in the face of evidence.” Who knew?)

Three days earlier, on February 4, John Bates, a former official with the National Oceanic and Atmospheric Administration (NOAA) — he was in charge of that agency’s climate-data archive — posted a lengthy account detailing how a 2015 report on global warming was mishandled. In the blog Climate Etc., Bates wrote a specific and carefully sourced 4,100-word exposé that accuses Tom Karl, his ex-colleague at NOAA, of influencing the results and release of a crucial paper that purports to refute the pause in global warming. Karl’s study was published in Science in June 2015, just a few months before world leaders would meet in Paris to agree on a costly climate change pact; the international media and climate activists cheered Karl’s report as the final word disproving the global-warming pause.

But Bates, an acclaimed expert in atmospheric sciences who left NOAA last year, says there’s a lot more to the story. He reveals that “in every aspect of the preparation and release of the datasets, . . . we find Tom Karl’s thumb on the scale pushing for, and often insisting on, decisions that maximize warming.” Karl’s report was “an effort to discredit the notion of a global warming hiatus and rush to time the publication of the paper to influence national and international deliberations on climate policy.” Agency protocol to properly archive data was not followed, and the computer that processed the data had suffered a “complete failure,” according to Bates. In a lengthy interview published in the Daily Mail the next day, Bates said:

They had good data from buoys. And they threw it out and “corrected” it by using the bad data from ships. You never change good data to agree with bad, but that’s what they did — so as to make it look as if the sea was warmer.

Instead of taking these claims with the level of scrutiny and seriousness they deserve, most in the scientific establishment quickly moved to damage-control mode. In more testimony to the House Science Committee last week, Holt pulled one sentence from an article published in an environmental journal that morning, quoting Bates as saying, “The issue here is not an issue of tampering with the data but rather really of timing a release of a paper that had not properly disclosed everything it was.” (I guess that alone isn’t enough to raise any red flags in climate science.)

Holt went on to tell the House Committee on Science, Space, and Technology, which has been investigating the Karl study since 2015, that “all [Bates] is doing is calling out a former colleague for not following agency standards.” This man of science intentionally overlooked the damning charges in Bates’s own post to search out a tiny nugget in a biased article. Apparently, discovery and humility in the face of evidence are valid only when they result in politically desirable outcomes.

I asked the AAAS (which publishes Science, where the Karl study first appeared) why the head of their organization selected that one quote and failed to address the other issues Bates had raised: not vetting experimental data, failing to meet agency standards, and rushing to publish the report. Science editor in chief Jeremy Berg told me that Holt’s statement to Congress “was consistent with impressions from other private communications that had been conveyed to Holt” (emphasis added). Apparently, discovery and humility in the face of evidence are valid only when they result in politically desirable outcomes; impressions and feelings carry more weight otherwise.

It shouldn’t come as a surprise that the AAAS and Science are trying to downplay the conflict. Bates says that Science violated its own policy for archiving and making data available when it published the Karl study. The policy states that “climate data should be archived in the NOAA climate repository or other public databases.” Bates maintains that there is an urgent need for a “systematic change . . . to scientific publishing.” 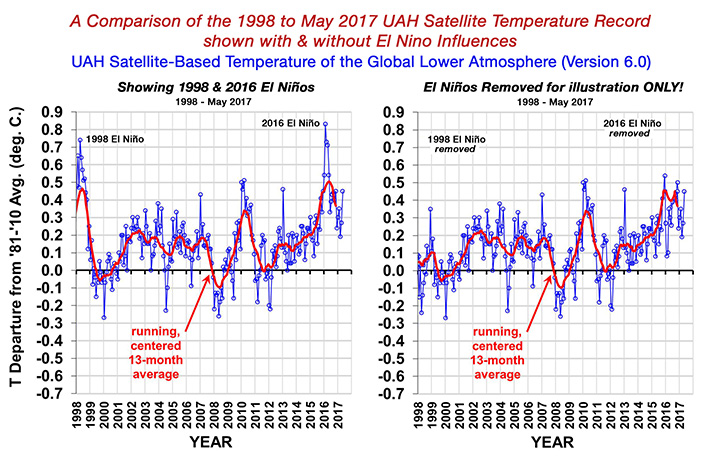 Actual 19+ year satellite record on left; el nińos removed in 1998 and 2016 on right (to illustrate warming "pause" or "hiatus"

The science media also went into overdrive to twist Bates’s words and allegations. Science ran its own article on February 8, with the headline “How a culture clash at NOAA led to a flap over a high-profile warming pause study.” The magazine suggests that Bates’s actions are due to a personal grudge. In a post on his website RealClimate, climatologist Gavin Schmidt downplayed the scandal as a “NOAA-thing burger” and accused Bates of adding “obviously wrong claims to his litany” and of “let[ting] his imagination run beyond what he could actually show.” And in a completely misleading article, a climate blogger for The Guardian claimed that Bates feared that climate “deniers” would misuse his information (although Bates did not say that). The Guardian blogger also lamented that “consumers of biased right-wing news outlets that employ faux science journalists were grossly misinformed by alternative facts and fake news.”

Don’t expect this to stop any time soon. Climate alarmists and profiteers will only intensify their smear campaign as this unravels. Congress is now expanding its investigation of NOAA, Bates has indicated that more information and documents are forthcoming, and NOAA is now saying it will bring in outside experts to analyze the Karl report. As Holt told the House Science Committee, “when one’s cherished beliefs and partisan ideologies and wishful thinking have turned out to be wanting, scientific evidence is most likely all that remains.” No doubt he completely missed the irony of his own statement.

Julie Kelly is a writer from Orland Park, Ill.