Massive attention has been rightly focused on the cover-up of former football assistant coach Jerry Sandusky’s sex scandal by Penn State’s recently fired President, Graham Spanier. Yet nothing but disinterest attends Spanier’s equally damning malfeasance in his failure to assure even a pretense of legitimacy to a major Penn State academic investigation that, ironically, focused on research that produced a graph resembling a hockey stick!

Massive attention has been rightly focused on the cover-up of former football assistant coach Jerry Sandusky’s sex scandal by Penn State’s recently fired President, Graham Spanier. Yet nothing but disinterest attends Spanier’s equally damning malfeasance in his failure to assure even a pretense of legitimacy to a major Penn State academic investigation that, ironically, focused on research that produced a graph resembling a hockey stick!

Former President Spanier's malfeasance played key roles in both scandals, apparently for the same reason:  he wanted to preserve the flow of money to the University, regardless of consequences to others.

A brief synopsis for those unfamiliar with the academic scandal:  Four complaints were raised against Prof. Michael Mann of climate change "Hockey Stick" fame. Spanier allowed Penn State’s Inquiry Committee (PSIC) to dismiss out of hand three of the four complaints and create an illusion that Mann was exonerated by failing to assure the integrity of a complete and objective PSIC investigation. Apparently, Spanier was fully aware of the PSIC whitewash.  Not one of Mann’s many critics were either called to testify, interviewed, or allowed to submit evidence. With Spanier's blessing, the PSIC simply ignored Penn State’s policy requiring such investigations “look at issues from all sides” (which must necessarily include critics of Mann’s work). Where an honest investigation would solicit evidence from critics, the PSIC simply built a wall to exclude critics!

Among those critical of Mann's methodology is a leading authority on statistical techniques, Dr. Edward Wegman, a man whose reputation is beyond reproach. Dr. Wegman entered the "Hockey Stick" fiasco when he accepted an assignment from the congressional Energy and Commerce Committee "to assess the [Mann] hockey stick controversy pro bono, assembling an expert panel of statisticians to help with the job, also working pro bono."2 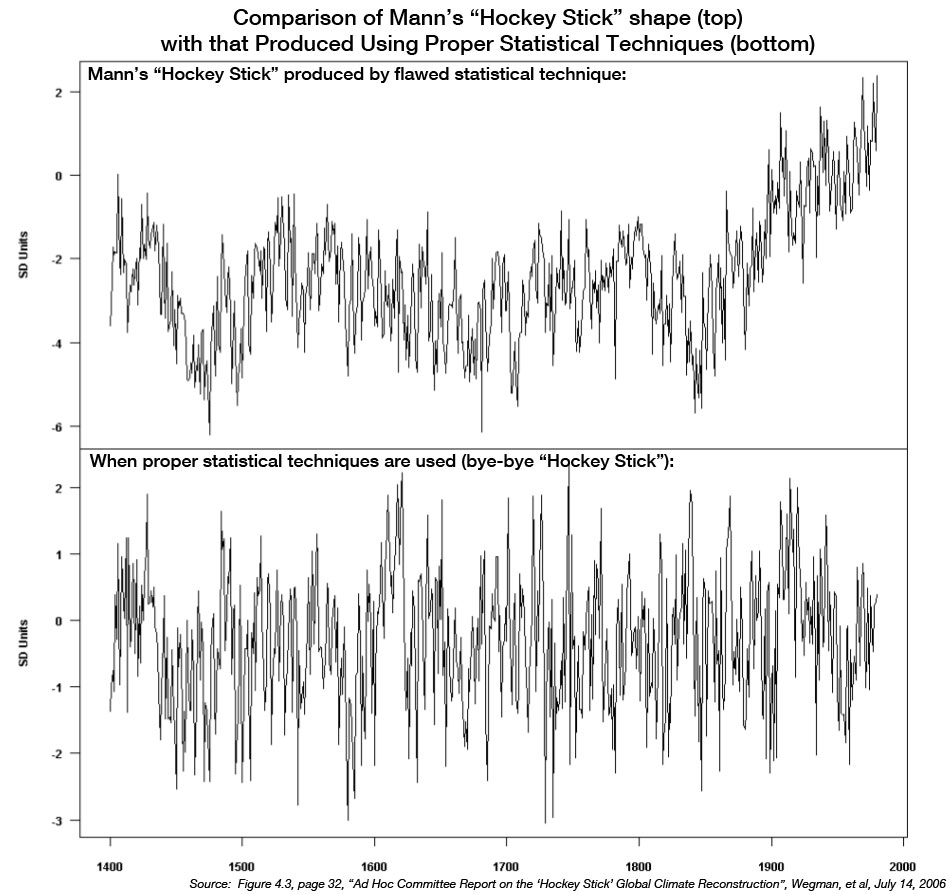 Spanier's malfeasance is rooted in his accepting the committee's findings that basically concluded Mann must be innocent on the basis of the strikingly naive belief that his fellow climate scientists' support provided ample justification for his innocence! That, together with the potential for more millions in funding for Mann's future research at the University, apparently sealed the verdict! Knowing the PSIC failed to perform a proper investigation, Spanier opted to sanction PSIC's misconduct by simply looking the other way.

Incidental to Wegman’s primary investigation was the Wegman team's discovery that Mann’s fellow paleoclimate scientists constituted a relatively limited "clique" of scientists who engaged in circular peer-review, i.e., they "reviewed" each others’ works so that no real dissenting views were heard. On this point, the Wegman report stated the "paleoclimatology community seems to be tightly coupled as indicated by our social network analysis... " (the clique). Given this background, it is hardly startling that Mann's fellow scientists supported him!

It would appear Spanier’s routine approach to investigations of University scandals was to sanction a whitewash of any whose exposure might diminish the flow of funds to the University.

Because the Mann investigatory whitewash is so transparent, objective observers do not believe Mann was exonerated (as Spanier claimed and the press trumpeted).

If really innocent of wrongdoing, Mann should be clamoring for a new and thorough PSIC investigation staffed by entirely new personnel committed to seeking the truth.

To restore the integrity of both Penn State's academic standards and PSIC process, it is essential that a renewed Mann investigation with entirely new PSIC personnel be initiated without delay. A separate investigation should address potential misconduct of the earlier Mann PSIC. These new investigations are no less important than a full and proper investigation of the criminal behavior of those who facilitated former coach Sandusky’s prolonged egregious conduct.

Should Mann oppose reopening the case, he would essentially be admitting, "I'm guilty, and I don't want to be caught by an honest inquiry."

Of great significance to the importance of this scandal is the prominent role Mann's "Hockey Stick" chart played in the subsequent report to policymakers of the Intergovernmental Panel on Climate Change (IPCC). The potential impact of bad science on international policy should not be underestimated. Despite independent repudiation of the chart, its veracity has been stubbornly defended by Mann's friends in his paleoclimatology clique. It is therefore imperative that Penn State perform a legitimate, full and proper investigation of each of the allegations concerning Mann's academic conduct in developing and defending his work.

Pennsylvania's public and their Governor must demand equally comprehensive investigations of these scandals so that any misconduct is ferreted out and those responsible for both the misconduct and its cover-up are punished appropriately. Should Penn State fail to act to expose official misconduct in sports and academics, the consequence will be irreparable damage to both.

Appropriate legal action against Spanier for his malfeasance and the harm he has brought to Penn State’s reputation should also be actively pursued.

Bob Webster, a 12th-generation descendent of both the Darte family (Connecticut, 1630s) and the Webster family (Massachusetts, 1630s) is a descendant of Daniel Webster's father, Revolutionary War patriot Ebenezer Webster, who served with General Washington. Bob has always had a strong interest in early American history, our Constitution, U.S. politics, and law. Politically he is a constitutional republican with objectivist and libertarian roots. He has faith in the ultimate triumph of truth and reason over deception and emotion. He is a strong believer in our Constitution as written and views the abandonment of constitutional restraint by the regressive Progressive movement as a great danger to our Republic. His favorite novel is Atlas Shrugged by Ayn Rand and believes it should be required reading for all high school students so they can appreciate the cost of tolerating the growth of unconstitutional crushingly powerful central government. He strongly believes, as our Constitution enshrines, that the interests of the individual should be held superior to the interests of the state.

A lifelong interest in meteorology and climatology spurred his strong interest in science. Bob earned his degree in Mathematics at Virginia Tech, graduating in 1964.